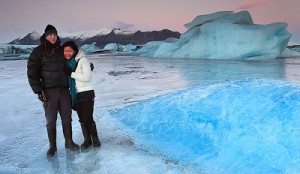 Behind Arctic Photo are two persons, Örvar Þorgeirsson the photographer and Kanya Hanklang (most people call her Mai) the store manager. It also happens that we are married. Örvar has been photographing since 2006 but we started this company in 2009 when we opened our Reykajvík gallery at Laugavegur 50.

An mountain adventurer since his teenage years. On his many trips to the Icelandic mountains and wilderness the photographer became obsessed with capturing the raw beauty of the places he visited. Over the years he has captured Iceland’s most wild places on his camera from the colorful and never ending midsummer arctic sunset to the inspiring displays of northern lights in winter.

For a source of inspiration check out my Inspirational Photographers page.